Why we have to exist!

Posted on January 17, 2014 By barbara@tvbygirls.tv

This is a good example of how images tell a story.  And how mainstream media seem determined to treat women leaders with a different set of rules than men.

A few things to look at here…

no face–just body parts including high heels which sort of sexualize and diminish our woman leader–HILLARY CLINTON.

shoes stabbing a man character–setting up the woman leader as out to crush men…not partnering with men..but instead ‘man hating’.

What’s the title doing? Can anyone stop Hillary?…the whole thing sets up the sense of Hillary needing to be stopped!! like Godzilla or the plague.  Really? come on!

I could go on, but I won’t.  So you tell us what you think.  How do these images tell a story that we think is just downright sexist?  Check out the original article. 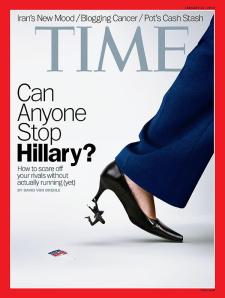